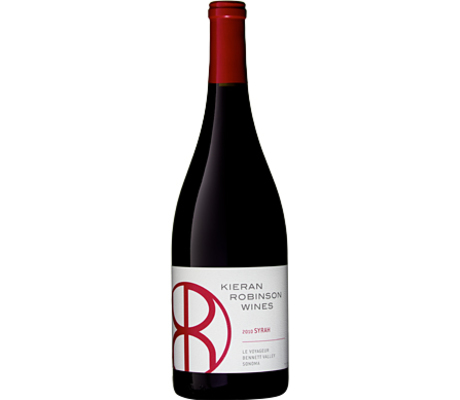 This is a sleek Syrah that pays tribute to the winemaking styles of the old world. Low in alcohol, this wine is earthy and gamey with some nice dark fruit and soft tannins. We can't get enough of this easy to drink and very well made wine. 50% whole cluster, fermented in small 1-ton stainless steel tanks, hand punched and left on skins for 25 days. Aged in 50% new French oak for 16 months. Bottled unfined and unfiltered in April 2012.

Kieran Robinson Wines is tucked away in Dry Creek Valley, just four miles northwest of downtown Healdsburg. We actually got lost winding up a mountainous, one lane road to meet Kieran at his property for the first time. Once you get to to the end of the road, the small estate opens up beautifully. If you're in the area, we highly recommend reaching out to request a private tasting with Kieran in his rocking adirondack chairs overlooking the estate vineyards.

For a young winemaker, Kieran Robinson has an incredibly broad portfolio of winemaking. He cut his winemaking teeth in the finger lakes of Upstate New York during college while working at small production wineries that specialized in Alsacienne white. After spending time battling the elements in Philadelphia's countryside, a very non-traditional wine region, Kieran moved to the Northern Rhone region of France. Working for Domaine Pierre Gaillard gave Kieran the appreciation for the deep-rooted French viticulture and winemaking philosophies, and once work was finished in Cote Rotie, Kieran and wife/co-owner Kristie moved to Napa Valley to expand their winemaking knowledge. After his tenure at Cakebread Cellars, he moved to Sonoma to work under the tutelage of Paul Hobbs. Refining his skills at Jericho Canyon Vineyard with famed winemakers Aaron Pott and Michel Rolland, Kieran launched Kieran Robinson Wines with the 2009 harvest, focusing on Rhone varietals, to much acclaim. His wines are now a mainstay on The Girl & The Fig's wine list, downtown Sonoma's most popular restaurant which has one of the best lists of Rhone wines you'll ever come across.