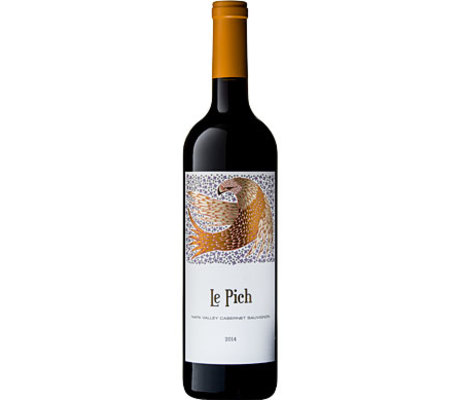 Aromas of black plum, blackberries, black cherry, lilacs and graphite. This full-bodied, 100% Cabernet Sauvignon is rich and beautifully balanced with flavors of fully ripened black fruit, floral notes, and melted chocolate, leading to an explosively long finish. This is every thing you would expect from the winemaking team of Steve Matthiasson and Julien Fayard (Philippe Melka's previous director of winemaking at Lail, Gemstone, Vineyard 29 and more.). Outstanding effort. 400 cases made.

This wine represents a tremendous value and is a great gateway to the very top end of Napa Cabernet Sauvignon.

Le Pich, which is the Wappo Indian term for "golden eagle," is the sister label of Napa Valley's esteemed Purlieu Wines. The wines are crafted by rising star winemaker Julien Fayard. Originally from France, Julien has lived in the Napa Valley since 2006, when he and his wife agreed to settle down by “meeting halfway” — between his home in France… and hers in Sonoma. In France, Julien worked in both Provence and Bordeaux, where he defined his core winemaking style at the exalted first growth Château Lafite-Rothschild (he even lived in Lafite’s grand château for a period) as well as at Smith Haut Lafitte. In Napa, Julien worked at Quintessa before joining Atelier Melka, where he spent five years as the Director of Winemaking. He has worked with the likes of Lail Vineyards, Gemstone, Dalla Valle, and more and his Le Pich wines are some of the best values we've found in Napa Valley.